Now that I’ve written about the day that had the biggest impact on me during my Learning Abroad experience in Africa its time to rewind to the beginning.  This is the part in the movie where the words on the screen say “Six Weeks Earlier”.

Except, I’m not sure where to begin…..

Does this part begin when I decided to go back to college in January of 2017  “Eighteen months Earlier” or does it begin when Trent came back from his Naked and Afraid adventure after contracting malaria, “Ten months earlier”.  There are so many amazing stories that happened in these time frames that could each be their own blog so for now….. We’ll begin here…….  “Three Weeks Earlier”…..

It all began when Trent was invited to be a survivalist on Discovery Channels adventure show Naked and Afraid XL All Stars. 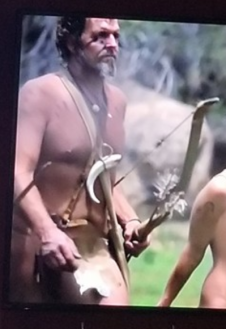 The challenge took place in South Africa and the survivalists were to attempt to survive in the Selati Basin for 40 days. As you know by now if you’ve watched the series or seen his Social Media feed, Trent contracted Malaria during this challenge and though the disease threatened to take him out of the challenge he persevered.  His warrior spirit drove him through extraction with his new “tribe” of naked friends and he completed what many have called “crazy” and I call the most EPIC ADVENTURE OF A LIFETIME!!  Upon his return to the United States we found ourselves at the University of Utah Travel Clinic being checked out by Dr. Scott Benson to make sure Trent’s malaria had been taken care of and he was on the path to recovery.  During the check up, Dr. Benson mentioned that he took students from

the University of Utah to Ghana, West Africa every year for a Global Health Learning Abroad Research Project. Coincidentally, I had just been notified a week before that the waiting list I was on for my International Studies class had been declined.  This was the FINAL credit I would need to complete my degree at the University of Utah for my Bachelors degree in Psychology. I certainly perked up when Dr. Benson mentioned something about students going to Africa. The moment Trent returned from this mystical land I could feel my heart longing to set foot upon this continent and Dr. Benson had just handed me the map.  We discussed further that this would fulfill the credit I needed for graduation. Dr. Benson also explained that although I would be travelling with pre-med students, I was not required to be pre-med. It was as if the theme music for some heroic super hero film began to play and I knew that seven months from now I would be travelling with complete strangers, to an unknown land to meet a culture I would fall in love with.

But I just knew this journey had something magical in store so “trust the process” became the mantra every morning when I stepped into my day. I took it step by step, went to all the meetings, submitted my application, started to get my budget together, furiously wrote up scholarship essays, arranged for my vaccinations, took my online prep classes, completed all the learning modules, set up a go-fund me to help out with costs, arranged for financial aid to supplement what I wasn’t able to raise and finish up the required activities of the University before leaving.

Before I knew it June 28th had arrived. I was packed and headed to the airport. I had planned to fly out a few days early and meet a few of the pre-med students in Accra to have a few extra sightseeing days. When I checked in online the airline offered $200-$500 to give up my seat because they had overbooked the flight. I ignored the offer and although the anxiety was beginning to set in about going early and not really knowing anyone or what to expect, I took a deep breath and continued to “trust the process”. I summoned my courage and reminded myself that THIS was my adventure of a lifetime!! Everything was so smooth with my check in, luggage weighed in right at 50 pounds, security lines were short and soon I was standing in front of gate B2.  An announcement came over the speakers and announced that due to the extreme heat in Salt Lake City they needed at least 40 volunteers to give up their seats because the plane could not take off with the weight.  They offered $2000 for anyone that volunteered….THAT WAS THE PRICE OF MY TICKET!!!! I went to the counter and asked if they could get me on another plane the next day to make sure I would arrive in Ghana on the day my professors (Dr. Benson and Dr. Dickerson) would arrive.  That was possible and I texted the other students and let them know I wouldn’t be joining them early.

BONUS!!!  One more night of snuggles with my love. When I arrived at the airport the next morning I was informed that the flight the night before (that I’d given my seat up for) had sat on the tarmac for four hours because of complications and then the flight was cancelled.  I was given 12,500 sky-miles for this inconvenience …which I didn’t actually experience because as you recall I had given up my seat for $2000….. so $2000 and 12,500 sky-miles and a day later, I was on my way to Cincinnati, then on to Paris and final destination Ghana. There is a reason that the professors and all the advisers say repeatedly “Be flexible, things happen, roll with the changes.”  It was pretty amazing how things were working out. My anxiety level had completely dropped as I was now travelling with one of the pre-med students.  I had met her the day before at the airport when we both decided to give up our seats.  (Her name is Amy….coincidentally that is my best friends name that I traveled to Japan with some 30 years prior….I love little winks from the universe that let me know all is well.)  I was confident my professors would be at the final destination to handle the particulars and answer the million questions I would have about arriving in a foreign country. I sat back, fastened my seat belt and took a long, excited, deep breath….. I was on my way to AFRICA!!!!

"Sheri Joi has changed my life in a remarkable amount of time!!! In helping me see the negative attributes that I was hanging onto, she assisted in making me aware of processes to letting go easily instead of fighting to try so hard. It has dramatically changed my attitude in life, financial situation, business and personal relationships!!!! And best of all, rekindle the relationship with myself and pulling all the strengths back out of my core!!! Looking forward to continuing down the life that I was created for knowing the skills she has helped me set fourth!!!

Sheri has the ability to connect to people and uplift them. I loved working with her because she always made what we did feel a joy. Sheri brings joy and passion to everything she touches. She has a love and zest for life and her desire to live it to its fullest shows in everything she says and does. She has the ability through her own life struggles to relate to people from all walks of life.

Daryl, Visionary of the Divine

Sheri Joi's love and guidance helped me have the courage to let go of the past and embrace the light of a beautiful today with healing hope for the future. She helped me to more fully "see" myself as beautifully, wonderfully, uniquely me! That I have been blessed with the ability to create good and attract the best things into my life! She serves with gentleness and unconditional love!

Sheri Joi is a wonderful, brilliant woman! She helped me shed many of my long-held negative beliefs about myself, my ability to care for my family, and my life. She helped me see the good in me and my future; to believe and hope that the best IS coming. Her love and encouragement got me through a very dark time in my life. Her warmth and caring are evident in every interaction I've had with her. She brings light and JOI to all, and help to change for the best for those who want it.